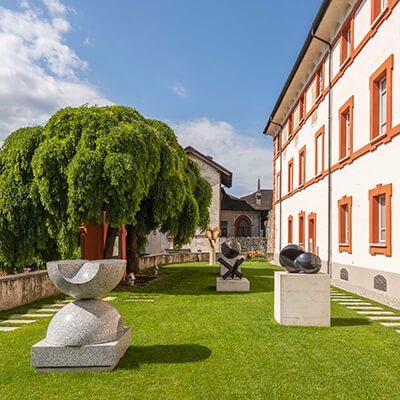 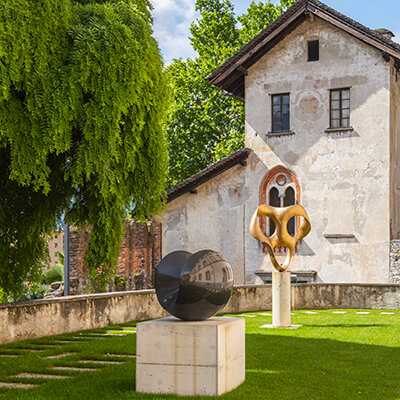 The sumptuous Casorella residence was built around 1580-90 by the knight Andrea Lussi. The name “Casorella” derives from the contraction of “Casa degli Orelli” (Orellis’ House), a noble family of Locarno who later acquired it. It is a compact building, narrow and long. On the facade it’s possible to see faint traces of paintings depicting allegorical figures and a large coat of arms. The burgundy red of the decorative elements dates back to the 19th century, all the while medieval elements are still visible. The two access portals to the structure date back to the 16th century, whereas the small loggia leading to the floor used by noblemen was built during the following century. The latter is decorated with stucco depicting hunting scenes, trophies, little angels, and heraldic references. The ceiling of the loggia is also enriched with stucco. Moreover, it also bears a fresco with an optical illusion made in the 18th century by the painter Giovanni Antonio Caldelli from Brissago. The main hall has a ceiling enriched with stucco, in the centre of which there is a large canvas depicting the Judgment of Paris, by the painter Giuseppe A. F. Orelli from Locarno, who painted it in 1773. At the end of the room a large fireplace made in the 16th century, bearing the coat of arms of the Lussis, the Orellis, and Ruscas, who were the last inhabitants of the house, stands out. The other rooms of the structure have wooden coffered ceilings. The lake-themed 19th-century paintings that used to be on the walls haven’t been maintained.